Necromunda is a world of mines, factories, refineries, and processing plants. The planet is a vast powerhouse of industry, making thousands and thousands of different items for use throughout nearby planetary systems. In the darkness of the underhive, fights between the clan houses over the limited resources are a way of life for the citizens of Necromunda.

Jump into the world of skirmish wargaming with Necromunda: Hive War. Choose your gang and fight thrilling, fast-paced tactical games set in the darkness of the underhive. This boxed set is perfect for new players and contains all of the rules, models, and accessories that you need to start gaming. As well as two gangs, the box also includes enough terrain to build your own little corner of Necromunda.

– An array of modular terrain
– Double-sided gaming mat
– All of the dice, tokens, cards, and templates needed to play

Also included is a 104-page softback rulebook containing:
– Background on the planet of Necromunda and its Houses
– The rules for playing games of Necromunda
– Multiple scenarios to play through
– Rules for creating your own gang
– Rules for the weapons and wargear available to gangs 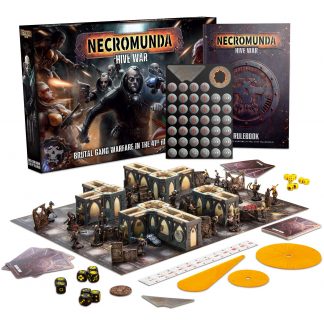